Everything here links out to another site where the projects are hosted.


Added my art to a small flash collab, designing my own room to be connected with many others in a seek-and-find type minigame.


Added my art to a large game collab, designing a bonus image/wallpaper for a christmas gallery. 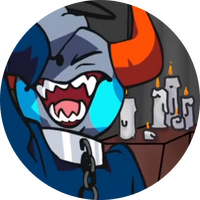 
Drew and animated several characters for the mod: The version of boyfriend shown fighting against Artemis, all character art used in vs Justice (including Justice, Boyfriend, the kids on the jukebox, Ursa, Artemis, and Harvest. Alternative versions of Boyfriend, Pigeon, and Justice will be released with the full version of the mod and do not appear with the demo. Justice also has loads of lipsync.

Did ~90% of the programming for the demo, released on Kade Engine.

I also helped with a few character sketches and poses for others, too, a couple Artemis poses and also Jukebox-Harvest's base sketch.


Demo: Drew the background and animated the main opponent. Did all the needed edits to the programming.

A full version of the mod is being worked on, with several different opponents, moving characters, three+ different backgrounds. I will be doing some (not great) music, but I'm also collabing with a couple other musicians for the full release. There will also be cutscenes. I'm in over my head, enjoy the demo. 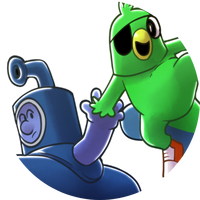 
I added a collectable trophy to a gachapon-based small flash game. Currently unreleased. 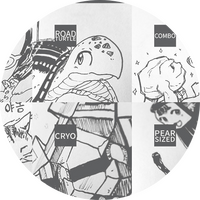 
A scanned collection of my themed ink drawings for October of 2019; purchasable for $2